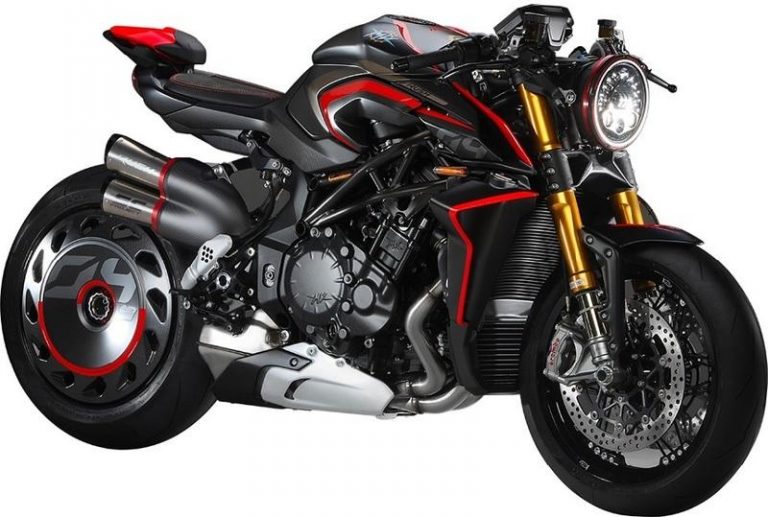 Agusta is known as a brand that produces high-quality motorcycles with an incredible design. Their latest model, the Agusta Rush 1000, is maybe similar to other of their models such as Brutale 1000 RR, or Superveloce 800, but this model represents an innovative level when it comes to performances and design.

The main structure of this bike is similar to model Brutale 1000 RR but has much better performance in each segment. The first presentation of this bike was at the EICMA Motor Show in Milan, Italy. Here is some further introduction to the design and performances of this attractive motorcycle.

Design and Performances of the Agusta Rush 1000

The first thing that almost everyone will spot when they see this bike is the rear tire. The 200/55 tire is made from aluminum and carbon fiber and it reminds of drag racing tires. Rush 1000 has an engine with a size of 998cc and four cylinders which is the same as one in the model Brutale 1000.

Also, this bike is using radial valves and the connection rods made from titanium. Radial waves are similar to those in Formula 1 vehicles, while the connection rods are seen in the bikes that are competing in MotoGP racing. The engine is fulfilling the Euro5 standards and has a strength of 208 horsepower. However, if you add him racing exhaust, Rush 1000 can have up to 212 horsepower.

When it comes to the design, this model from Agusta has round LED lights with the ability to follow the angles. The seat is made in a more minimalistic style. Also, there are four modes for the engine, Sport, Racing, Race, and Custom.

The Rush 1000 comes with cruise control, and have the assistance for gear shifter and wheels. Furthermore, there are eight levels of traction control, ABS, and control of launching. These are important features because of this motorcycle has high acceleration and speed.

For electronic suspension, the Agusta is using Öhlins electronic control and hydraulic system. The same company made the suspension and steering damper. For the brake system, there are two discs that have 320mm in range with an additional caliper.

There is a lot of details on the bike that are made from carbon, along with titanium bands. The dashboard is equipped with a 5-inch TFT which has the ability to connect with your smartphone using the MV Ride application. The date of the start of the production is not known yet, but we can expect it by the first quarter of 2019.

As we already said, the engine is a four-cylinder with 988cc and a 208 horsepower. The bore x stroke is at 79 x 50.9. The maximum torque of Rush 1000 is 86ft/lbs at the 11,000 rpm. For the cooling system, they are using oil and liquid radiators, and semi-dry-sump for oiling. The gearbox has 6 degrees for transmission.

The frame of this bike is made of steel. The handlebar is a clip-on. We also mentioned Öhlins as a producer of front and rear suspension which can be adjusted with electronic compression. The dimensions of aluminum wheels are 3.50 x 17 inches for a front wheel, and the 6 x 17 for rear wheels. The size of the tires is 120/70 x ZR17 for the front, and 200/55 for the back tire.

The bike weighs 410 pounds and has a fuel capacity of 4.2 gallons. The wheelbase is long 55.71 inches, while the seat height is 33.27 inches. Also, you can lower the weight of the Agusta Rush 1000 by installing the race exhaust, which decreases the total weight of this bike by 5 pounds.

This motorcycle comes in various colors, such as Metallic bronze, Matte Grey, and Mamba Red Matte carbon. The price is not revealed yet, but it is estimated that the cost of this bike will be around 40,000 dollars.

With amazing design and extraordinary performances, this bike represents one of the best bikes on the market. The Rush 1000 is the type of bike that you can hear miles away because of its great power, and it will make everyone to turn their heads after him because of its stunning design.