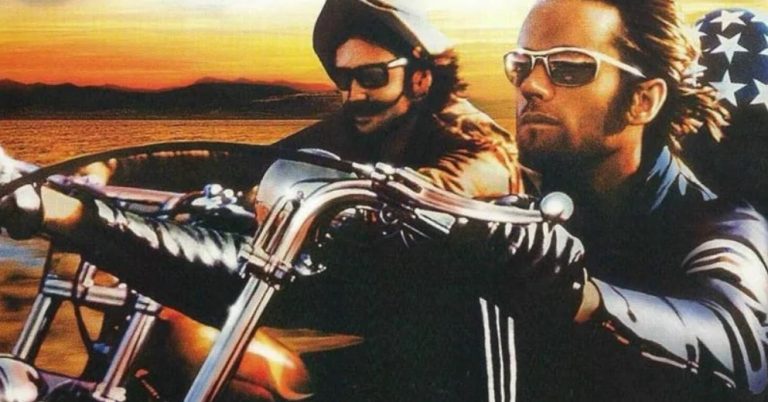 Bikers have always attracted a lot of attention wherever they appear. They have been so popular since the 1950s that many movies and TV shows have bikers as their main protagonists. The Hells Angels are probably the main reason why the popularity of bikers has become so widespread around the world. They are a motorcycle club that has members around the world, and they are portrayed in movies as outlaws living on the edge of the law, and are often referred to as one-percenters. Over the decades, bikers who ride race bikes from manufacturers such as Suzuki, Yamaha and many others instead of Harley-Davidson and chopper models have also become popular. If you are also a fan of such movies that are full of action, adrenaline, fast driving and beautiful women, then read our list of the best biker movies of all time and check if there are any that you have not watched.

This list simply has to start with the cult film, Easy Rider, directed by Dennis Hopper, and first screened in 1969. This film is famous even beyond just biker movies, but is generally considered a legendary achievement. The director, Dennis Hopper is also the lead actor alongside famous, Oscar winning actor Peter Fonda. Follow the two of them on their journey from California to New Orleans. Along the way, they discover different parts of the USA, and the whole trip is actually aimed at those two selling drugs. Along the way, they also meet Jack Nicholson, who is portraying George Hanson, lawyer and alcoholic. It is a role that made him even more famous and ranked him among the best Hollywood actors. He was nominated for Best Supporting Actor, and the film was also nominated for Best Writing, Story and Screenplay. For all these reasons, this is a must watch movie for anyone who loves cinema, and especially for all motorcycle enthusiasts.

This is a film that was made 2 years before Easy Rider, and also starring Jack Nicholson. It is interesting how he played in two cinematic achievements with similar themes in such a short period of time, and he also played in some others, low budget ones. This is a crime thriller genre and it is very tense all the time and shows an otherwise lonely man, who becomes part of the Hells Angels. At first he is very happy to be so well accepted by gang members, but over time he begins to see their criminal behavior, which includes the most serious crimes. You will see a lot of interesting models that they drive and it is definitely worth a look, even though it has a low score on IMDB. But if you don’t like watching movies which is over 50 old, see more tips here.

This is a classic from the 80s, which had only slightly less popularity than the movies Rambo and Rocky. While it may not have very famous directors, the lead actor was famous in those years, and his name is Gary Busey. The plot is very cliché and is a classic revenge story, but it is very interesting and will keep you on the edge of the seat all the time. He is a Vietnam War vet who returns home after serving his prison sentence. After rescuing a woman who has been attacked by a bike gang, the gang takes revenge on him by killing his wife. Since he has no help from the local police who are afraid of outlaws, he takes matters into his own hands and sets out to avenge his wife. We will not reveal more details to you, but watch this very interesting thriller. If the title reminds you of the famous song “Eye of the Tiger” by Survivor, you will hear it at the beginning, although it is not composed for this film(original score) but for Rocky.

Unlike the previous ones on the list, this film has a completely different pace. This is an indie film and is about finding the meaning of life while traveling by motorcycle through Canada. He decides on that path when he finds out that he has cancer. The action takes place slowly and is mainly focused on philosophical thinking, but also on very beautiful landscapes. Although it has not found its place on the bigger biker movie list, we think it is worth your time, both because of the quality of acting and action, and because it is visually appealing.

This legendary dystopian action is a must see. This role made Mel Gibson famous around the globe, later a famous actor, producer and director. The film is set in a dystopian future where there is complete lawlessness due to the oil shortage. Max is a former police officer, who stopped being that when he saw that the police could no longer deal with various gangs and after his colleague was killed. He decides to leave the police and live with his family, as peacefully as possible in this new, dystopian world. Yet the bike gang one day kills his wife and child. He then decides to kill all the gang members and sets off on his killing campaign. The second and third parts of Mad Max are also very famous and good movies. And Mad Max: Fury Road, which came out in 2015, won as many as 6 Oscars and is considered one of the best achievements of the past decade.

This historical film, co-produced by several countries is biopic about Che Guevara. It is about a road trip that happened in the youth of this famous revolutionary, guerrilla leader and one of the main personalities of independent Cuba. But this is not about that, most famous part of his life, but about the bike road trip where he slowly gets to know himself and on which he builds his political views.

Don’t miss any of these great accomplishments we’ve singled out for you.