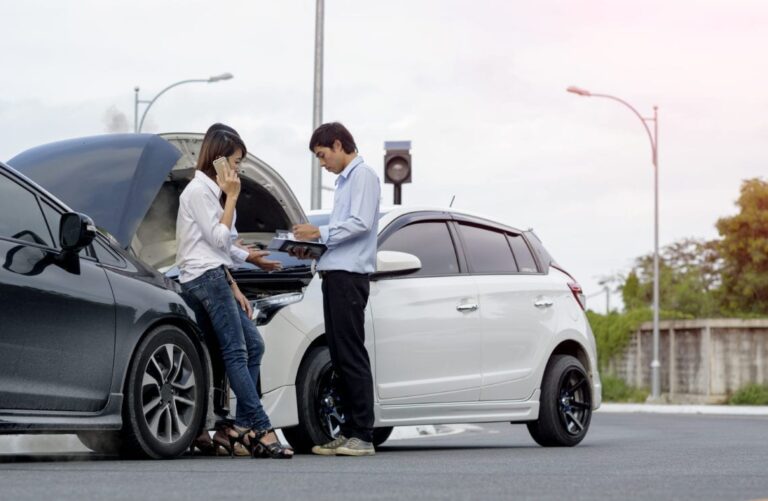 Traffic accidents happen often, and what is common to almost every crash is that participant believes that he is not the one to blame. Most people think that they are good drivers plus the stress you just went through often lead to conflict right after a collision, of course if no one is seriously injured. Sometimes the culprit is obvious, but in all other cases it is certainly not up to you to establish guilt, but to leave it to the authorities. However, it is very important who is to blame, primarily because of the insurance and that is what you and the opposing side will try to prove. We will explain in detail how to determine who is to blame, what is the most obvious evidence that someone is guilty, as well as what to do immediately after the collision.

What to do after car crash?

If you have determined that you are not injured and that no one else is injured either, there are a few things you need to do that can help you a lot later.

Watch what you say

In such stressful moments, it can happen that you say everything, and that is a big mistake. So try to give general answers to the police and never admit guilt. Not even if it’s obvious.

See immediately if there are eyewitnesses and take their data. If you don’t do it right away, it will probably be very difficult to find them later. Once you write down their contact, it will be easy for you to call them to court as witnesses. It’s especially good if you have a witness who, for example, heard another driver plead guilty or something.

The more evidence you gather now, the stronger your case will be. If you have the slightest injury, and even if you don’t, go to the doctor right away. Maybe he will find an injury that you don’t even know about, and the court only takes injuries that are immediately documented as authoritative. Also take photos of the crash site and the like.

Situations when culprit is obvious

There are situations when it is easy to prove who is guilty. Any of the following situations will easily judge that you are not or are the culprit.

If any of the traffic law violations are involved in the whole situation, then it is clear that the blame lies with the person who committed the offense. There are many such cases. Some of the most common are speeding, failing to stop at the stop sign, DUI, overtaking on double solid lines and many others. Of course the laws are different, so it’s important to know exactly what kind of offense was committed. This is why you need a specialized lawyer for that branch of law like Eric Ramos Law, who also told us that failure to yield or signal is one of the common traffic law violations, although somewhat more difficult to prove than for example going through a red light.

In law there is something called no doubt liability and rear end collision falls into that category. According to the law, it is always the fault of the driver who hits from behind, so the driver in front is not guilty. This can also be unfair, because sometimes the driver in front drives too slowly and that is why the one behind is too close and not as result of recklessness and dangerous driving. But such are the rules. That is why it is always important to keep the distance needed to break. It is necessary to keep at least one car length distance at all times. So if you were hit from behind or someone hit you, you know who is to blame. The only exception may be if the driver in front has broken lights signaling braking.

This is another case where in 99% of cases the outcome is clear. The one who turns left is responsible if he hits the one who goes straight. It is very easy for any police officer or insurance agent to recognize this because a car turning left will always have damage to the front, and another car will be damaged on the right flank. The only exception is going through a red light, speeding or the like. In any other case, the culprit is the one who makes the left turn.

Police officers are the first to appear at the scene of the accident. It is up to them to write as detailed and accurate a report as possible. They will be the first to take statements from witnesses. When everything is finished, they will submit a report. It is very important that you know what is written in the report, because it can even contain a statement about who is to blame. Yet their report is certainly not the only factor that is later taken into consideration in court and with insurance. If any of the laws are violated, the officer will issue an order to appear before a traffic court. While this is also nothing final, it is certainly not good for the outcome.

The adjuster will be the person to whom the case will be assigned and who will conduct the investigation, as well as monitor the entire case. He will conduct the investigation as well as the police, which means that he will review all records, then interview witnesses, ask for a report on vehicle damage and the like. All this will help him to come to a conclusion about who is guilty and a compensation figure will be formed accordingly. Anyone who considers that he was not negligent or considers that the compensation is too small, has the right to appeal and even to initiate litigation.

If the whole case goes to court, then it is up to court to reach a verdict. The court will take into account all the evidence provided to them by the police as well as the lawyers. They will examine witnesses, participants in the collision, police officers and anyone else they deem relevant. In the end, the judge and, in rare cases, the jury will reach a verdict.

We hope that our text has helped you understand how guilt is determined, but also what you should do if you find yourself in that situation. Keep in mind that there is also something called a shared fault, because it doesn’t always mean that only one is completely to blame. Sometimes it is also very unclear what happened and therefore very difficult to determine all the details.