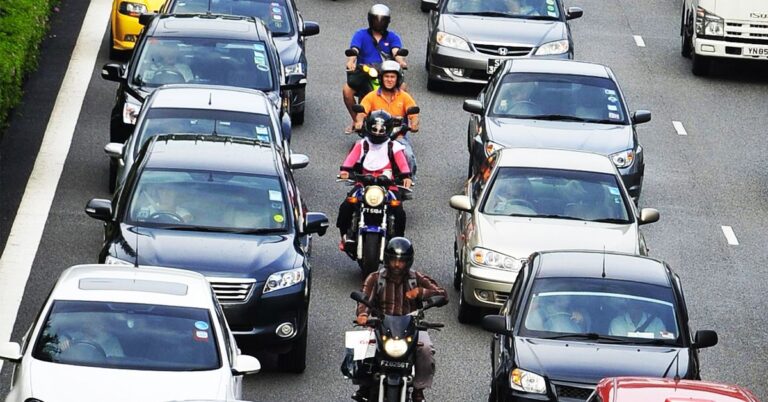 Bikers generally have a different perspective on the road, then the car drivers, which has created a certain stereotypical opinion about the necessary tension between car drivers and bikers.

Bikers blame car drivers all the time, claiming for taking their advantage in the traffic, showing up in front of them from nowhere, without using the signals, pushing them out of the way… the list continues. On the other hand, car drivers claim that in 90% of cases, bikers brought this upon themselves, because they drive extremely fast, in between vehicles, violating all the rules of the traffic ever written. Deciding who is right in these claims is a tough one. Even if you have 0 objectivity and decent experience in traffic.

Not all the countries in the world have the same level of driving manners, most complain about the low levels of traffic culture, due to various reasons. From a biker’s perspective, when you ride a decent machine, many things about traffic regulations will bug you. Unless you’re being on the open road, able to experience the full power of your bike.

To be more specific about what bikers hate about traffic, we have created a list. Keep reading and find out.

It may sound a bit ridiculous when you first read, but we promise the logic is very much relevant. It’s got nothing to do with stopping for pedestrians to cross over. And this also not only what bikers hate, but something car drivers, pedestrians, and bikers have in common.

When the bike’s wheels slightly catch the white lines on the road, especially if they’re a bit wider (like the zebra crossing lines) the driver gets the same feeling as if he is driving on ice. This situation significantly extends the stopping point.

Pedestrians have developed a habit or a reflex similar to the one athlete has, to skip the colored parts on the pavement, even if it’s dry. When the rain hits or when the streets are being washed the circumstances become even more difficult, because of the yellow bus stop lines on the pavement, aside from the lines diving traffic lanes.

Bikers with the least experience in traffic are the most vulnerable to this – because only a slight touch of the brake can be risky when driving over these pavement markings. However, sometimes this is just inevitable because marked areas are mostly found on the junctions where you need to break in order to change the driving direction.

2. Car drivers’ behavior behind the wheel

What bikers complain and claim to hate the most is the car drivers. Even though it’s nothing personal since they perform the same kind out routine regardless of the traffic (towards other cars, bicycles, pedestrians, everyone). However, if you see someone behaving badly in traffic, it’s easier to stop when you drive a car. It’s even easier to spot the behavior of the driver inside his vehicle when you are driving a car as well, hence it is easier to react on time and prevent the crash. The rest are just doomed.

So, what concrete behavior are we talking about? Not using signals? Talking on the phone? Texting while driving? All of the mentioned. The list can be too long if we continue asking.

However, if you ask the same question to a car driver, we’re afraid that the list can grow as extensive, from their side. One thing we can agree on is that bikers tend to be a very vain kind and that they will never admit the objective truth about their driving. They always claim the percentage of those bikers is very low, almost insignificant.

Let’s not fool ourselves any further, who can resist driving a machine with 180 horsepower, without turning the gas? The speed is like an opiate. After all the adrenaline works you to the points when you think you’re flying.

There different types of bikers, of course, those who travel to work and other obligation-related places by bike, and those who are adrenaline junkies. Both can get easily frustrated about the slow traffic movement because being on a bike is tempting. You have more possibilities to overtake and speed things up a little.

People will always find excuses for the things they shouldn’t really do. In this case, the excuse would be for example, my engine will overheat in the dense traffic, hence I really need to overtake you and go a bit faster.

This is a topic for professionals- overheating the engine due to the slow driving on a hot summer day. A lot of this depends on the construction of your bike. This is why before buying one, consult websites such as bike.net, or ask around a group of experienced bikers, collect all the info needed to make a solid decision about what kind of bike to buy if you live in a city with frequent traffic jams.

4. Having to wear a safety helmet

Aside from excuses for overtaking and speeding, not wearing a safety helmet is one of the most used. It’s too hot, imagine what’s it like underneath the helmet… I have to take it off… not to mention boots and jacket…

A smart biker will not sit on it without a safety helmet. No excuses. They are exactly the thing that will get you killed, on a bizarre route, such as going to the supermarket or a friend. These routes make people feel more relaxed and automatically not paying enough attention to safety.

Helmets are a mandatory safety feature, even if you drive a scooter. On these bikes, a 40 km/h speed can be deadly. Hitting the asphalt with your head is enough for a fatal outcome, not to mention something else. Then there’s a possibility of going under another vehicle.

The list is probably way longer, containing more points of frustration than what we wrote. But these are the most frequent ones, a list of common things every biker hates about the traffic.