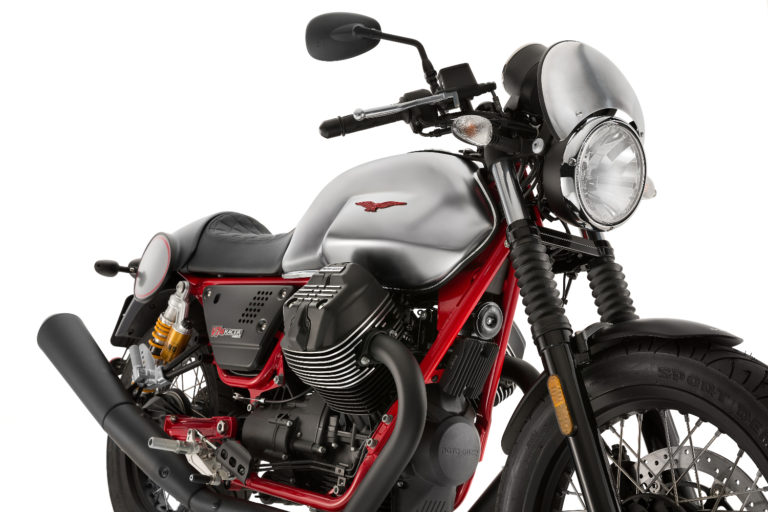 Moto Guzzi took inspiration from one of its most iconic models ever, the V7, and they are planning to release it in 2023.

Moto Guzzi said: “The new Moto Guzzi V7 III Racer is not only the most sports-oriented of the range but also the one with the most prestigious. This limited-edition model further demonstrates Moto Guzzi’s ability to continuously create true customs directly from the factory.”

The 2023 Moto Guzzi V7 Racer comes with glossy white graphics with red accents and with the “Rosso Corso” color scheme on the frame and swingarm, of course. This is an homage to the 1971 V7 Sport series which was nicknamed “Telaio Rosso” which means “red frame”.

They also put a leather strap that runs across the top of the gas tank and is the same color as the seat, which is brown.

Custom paint isn’t the only feature this bike has, it also has twin Öhlins piggyback reservoir shocks that are able to adjust for spring preload and rebound and compression damping.

Just like other V7 III Racers this bike also has foot pegs and a passenger seat cover, but you can always take them off. The spoked wheels include black channels and red Moto Guzzi stickers as well as the other sport models from the company and its rich racing history that carries more than 3,300 wins, including 14 Grand Prix titles, 22 world records and 11 Isle of Man TT trophies.

Just like other the other V7s from the third generation that was released in 2017, the Racer Limited Edition packs a 744cc transverse V-twin. The powerplant gives you 52 horsepower at 6200 rpm and 44.2 ft/lbs of torque at 4900 rpm.

The bike will be available for purchase in June in the United States and will start at $9999.