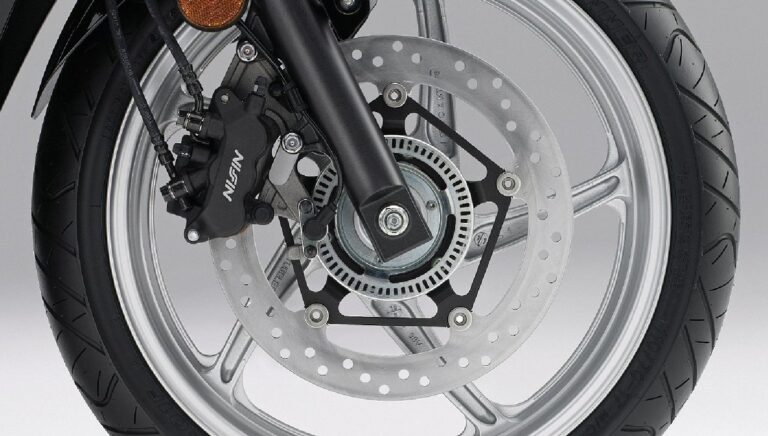 In this article we are hoping to shed some light on how ABS brakes work on motorcycles. As we all know ABS aka anti-lock braking system, prevents the sliding from the motorcycle when you are breaking., especially when the road is wet. With this in mind , it’s use has become obligatory, so that it improves the safety of everyone driving a motorcycle.

Initially it’s use was exclusively obligatory in cars, since 2003, but, since January 2006 it has also become obligatory in motorcycles in all models that have over 125 cc. With this ABS system in place, it helped prevent 1 out of every 4 accidents, reducing in almost 38% all accidents with physical injuries.

How does the ABS system work?

Working together with the additional breaking system in the motorcycle, the ABS is composed by a unit of control that is placed near the liquid of the brakes, and it’s this unit that sends information to the sensors that are on the wheels, and control the spinning of the wheels accordingly. If there is a risk of the braking system blocking the wheels, this system helps prevent it.

Without the ABS system the fall of the driver was almost certain, and the chance of the motorcycle to flip over was even more enhanced, all it took for that to happen was a little amount of water on the road. But, with the ABS brake system working, it helps prevent the blocking of the wheels, making it possible to break in a more short distance and in a smooth and stable way. As it was stated before, the sensors located on the breaks, are continually monitoring the speed and the probability of the wheels blocking, and if it comes to that , the ABS hydraulic system will reduce the pressure of the breaks keeping the motorcycle stable.

Although it looks like a very complex system that needs a certain amount of skill by the driver, there are people that defend that using the ABS doesn’t require any special training. This ends up being false, because knowing how the ABS on motorcycle works is essential to the driver, and each ABS system are very different on each brand of motorcycle.

Since January 2016, ABS on motorcycles is mandatory, whenever we talk about motorcycles with a power of 125 cc or more. On the other hand, those with a power between 51 cc and 125 cc should also use a combined braking system, the CBS.

ABS, because of its size, weight and price, was i on motorcycles, especially those with smaller power. But their evolution has set aside complex 4kg systems and has given way to others weighing just over 400g at more affordable prices. Its development over the years allows it to act correctly even when the pedal is operated on a steep turn or with the help of more advanced stability control systems such as the MSC.

I hope that this article has been helpful on understanding what ABS is and why it is important to be used.