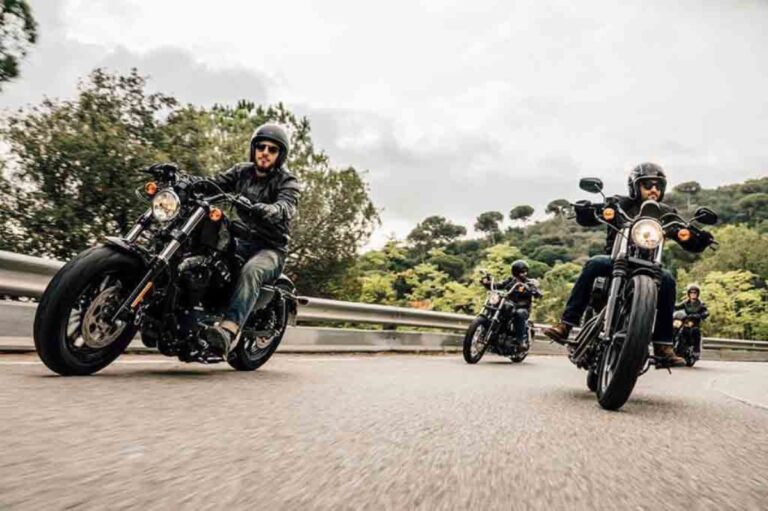 For some people, a motorcycle ride may mean anxiety and extra precautionary measures. For many motorcycle enthusiasts, though, it’s a relaxing ride that’s a part of their stress-relieving process. In fact, there have been recent studies that show there are not only physical health benefits of a 20-minute motorcycle ride but mental health benefits as well. When it comes to taking a bit of time out of your weekend for a nice ride, you could be contributing to a decrease in physical and mental health condition risks.

A recent neurobiological study showed that brain activity, sensory focus, and resilience to distraction were higher when participants were driving a motorcycle in comparison to when they drove a car and were at rest. Along with an increase in adrenaline and heart rate, researchers found that “riding also produced … a decrease in cortisol metrics – results often associated with light exercise and stress-reduction.”

With stress levels on the rise, one of the researchers explains, exploring the impact of various activities is crucial to finding alternative ways to improve mental and physical health. This study found a significant difference between riding a motorcycle, driving a car, and resting, suggesting “this could be significant for mitigating everyday stresses.”

It may seem obvious that riding a motorcycle can increase your adrenaline, but this can actually be connected to increased mental health benefits. An increase in heart rate and adrenaline can increase blood flow and the release of endorphins, both important aspects of reducing stress-related hormones and conditions. Mental health professionals from online therapy services like MyTherapist report that prolonged and untreated stress can increase your risk for future complications in mental health conditions, heart disease, and brain function.

Endorphins, one brain-fueling chemical released by increased adrenaline, is another “feel good” hormone that relieves stress and pain. Similar to the feeling you have after an intense workout, also known as “runner’s high”, these chemicals contribute to a positive and energized feeling. While the feeling can last anywhere from a few minutes to a few hours, prolonged exposure to a positive environment and subsequent events can coast the “euphoric” emotion throughout the rest of the day.

When you’re driving a car, your body is at rest and it’s easy to slip into an autopilot mentality that can make you less aware of your surroundings. In contrast, controlling a motorcycle typically takes a majority of your body, awareness, and balance to operate to prevent seriously endangering yourself and others. As concluded in the above-mentioned study, motorcycle riders are typically more alert, with higher concentration levels and decreased distraction throughout their ride.

Another study from the University of Tokyo in 2009 suggested an increase in brain activity could contribute to higher cognitive function as well. This could increase the ability to retain and relay information, combating age-related mental conditions like dementia and Alzheimer’s disease. This study also argued for the difference in operating a car versus a motorcycle: driving a car is more comfortable and doesn’t activate the same kind of brain stimulation.

This cycle of brain activity, promoted by an increased heart rate and blood flow, greatly contributes to an increase in mental health. Not only is the activity keeping you alert for your physical safety, but the stimulation can decrease stress hormones that contribute to mental health conditions like depression and anxiety. In fact, the activity has similar benefits to regularly practicing mindfulness, a form of meditation that centers your mind in the present moment for increased focus and decreased anxiety.

Research has shown a correlation between sunlight and serotonin production. Serotonin is another chemical in your brain that increases your feelings of happiness, contributing to the decrease in the effects of stress, depression, anxiety, etc. Studies have explored the idea that your skin may be able to synthesize serotonin with the aid of bright light and sunshine.

Now, you may be about to point out that during your ride, it’s advisable to wear gear that fully covers your body to protect you from road rash should you happen to get into an accident. This is certainly true: the traditional “biker look” of jeans, a leather jacket, and boots isn’t just for show. The common phrase new riders hear is to “dress for the slide, not for the ride.”

However, riding a motorcycle encourages you to frequently go outside, giving you an increased opportunity to be out in the sun. First, removing your jacket after the ride still leaves your arms, neck, and face exposed to sunlight. Additionally, you can take your bike maintenance from the garage to the driveway to have some extra time on a cloudless day. Finally, bike shows and daytime gathers are not only typically held outside, but they give you the opportunity to interact with others within the community that holds similar interests.

Riding a motorcycle can not only be great for your physical wellbeing but contribute to the release of hormones that decrease the effects of certain mental health conditions. When talking with a therapist or counselor, one of their first questions may be about your daytime activities and stress-relieving routines. Talking about your motorcycle hobby can potentially release a small amount of the same “feel good” chemicals you get from riding.

While for some people it may seem like a thrill-seeking activity that can be highly dangerous, there are classes and training that riders need to go through in order to get their licenses, similar to a driver’s test. With these precautions in place, it boosts the knowledge and confidence of a rider, contributing to their body awareness and attention.

The 2009 University of Tokyo study showed that motorcyclists that used their bike regularly had higher brain activity and got more enjoyment from their time. After at least two months of riding, participants reported that they felt less stressed in their daily lives and started looking forward to the next opportunity they had to ride. With an increase in the meditative practice of mindfulness and boosting positive hormones to combat mental health conditions, riding a motorcycle can potentially be one of the best hobbies an individual can pick up for their mental health.