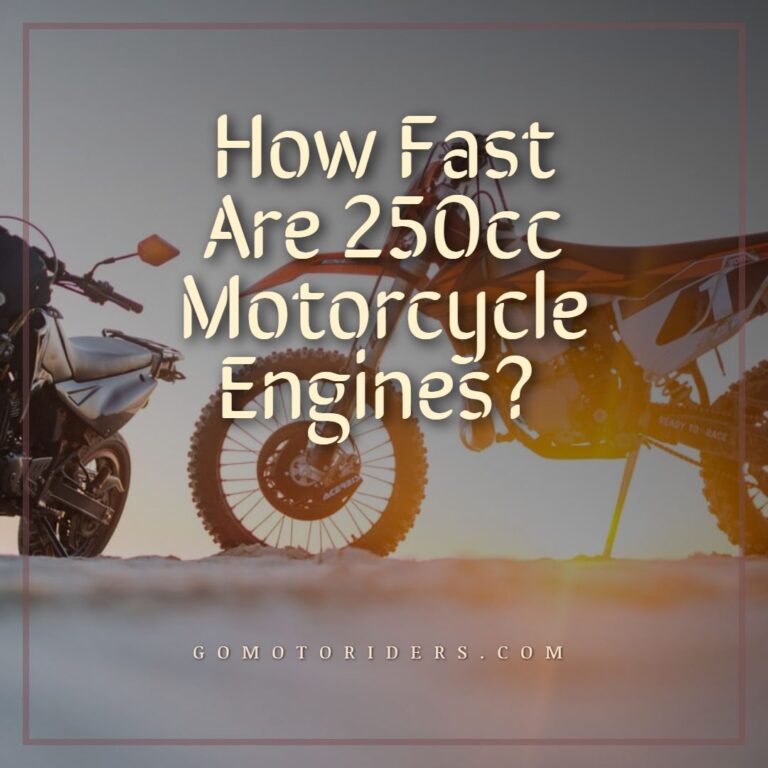 Has it ever happened to you that you are biking on the highway, and a model of bike older than yours zooms past you at a higher speed? It is not only annoying, but it also makes the person question their motorcycle riding skills. The simple answer to that is the difference between the engine type and model; for example, a 250cc engine goes much faster than a 125cc engine.

If you are looking for a detailed answer to the question lingering in the back of your head, ”how fast are 250cc motorcycle engines”, then you need to give a careful and thorough read to this article. I have shared all the information regarding the 250cc motorcycles that I possessed in this article.

How Fast Are 250cc Motorcycle Engines? Whether you are a die-hard biking fan or someone who has never sat on the seat of a bike, there must have been a moment where you wondered what the famous term ”cc” stands for.

How Powerful Is A 250cc Engine?

How Fast Can A 250cc Motorcycle Go? A 250cc engine is much more powerful than a 125cc engine, so naturally, it will go much faster than a 125cc motorcycle. If you are using a motorcycle that comes with original parts without any tweaking, then you will easily be able to achieve 150km/hr on that 250cc motorcycle.

What Affects The Speed Of 250cc Motorcycle Engines?

Before you start questioning the make and model of your motorcycle, let me tell you something. There is no one reason behind the speed of a 250cc motorcycle. There are many factors that affect how fast a 250cc motorcycle engine can go. They come with fewer parts as compared to a four-stroke engine, but a drawback with a two-stroke engine is that they make a loud noise.

On the other hand, a four-stroke engine has reduced fuel emissions, and the best feature is that it separates oil from fuel. This really helps in keeping the carbon monoxide emissions at bay. For a bike, the most suitable engine is a two-stroke engine; it is much more powerful and also lighter in weight.

This may not seem like a factor, but the direction of the wind and the ability of a motorcycle to resist wind also affects the speed of a 250cc motorcycle. Wind resistance in motorcycles is heightened by limiting the surface area of the motorcycle.

The larger the surface area a motorcycle has, the lower its ability to cut through wind will be. On the other hand, the model of motorcycle that comes with engines that are tucked away and lower surface area is much more capable of cutting through the wind and going fast even in the opposite direction of the wind.

Weight Of The Motorcycle This is why many manufacturers are now focusing on building aerodynamic models of motorcycles. In addition to that, there are also many models that come with tucked-away and hidden engines and smaller parts so that the weight of the motorcycle does not exceed a certain limit.

A factor that greatly affects the weight of the motorcycle is the material that is used in its manufacturing process. Steel is the most commonly used material in the construction of 250cc motorcycles. It is sturdy and durable, which is why many brands use it in their models of motorcycles.

However, steel greatly increases the overall weight of a motorcycle. On the other hand, aluminum offers durability and strength without adding any extra pounds to the design of a motorcycle, which is why it is considered as the ideal material.

Weight Of The Rider

On the other hand, if the rider of the motorcycle is not heavy in weight, then you can rest assured that the 250cc motorcycle will go really fast and achieve high speed in only a few seconds.

The Size Of The Tire However, for the bulkier models of 250cc motorcycles, larger tires are required to keep the motorcycle balanced and up and running properly. Furthermore, when I say the size of the tire, it does not only mean the height of the tire, but it also includes the diameter of the tires, which is also called the thickness of the tires as well as rim size. All of these factors altogether affect how fast a 250cc motorcycle will go.

Driving Skills Of The Biker

On the other hand, if you hand a 250cc motorcycle to a novice rider who is learning how to ride a bike, then obviously, the speed of the bike will be slow.

Condition Of The Road On the other hand, if you take your 250cc motorcycle out for a spin on a smooth road, then it will achieve higher speed in a matter of minutes.

What Is The Most Powerful 250cc Motorcycle Engine? How fast is a 250cc in mph motorcycle?

The speed of a 250cc motorcycle is dependent on many factors, which include the type of engine present in the bike, the number of cylinders, and the weight of the bike. However, on average, a 250cc motorcycle can easily touch 55 mph to 70 mph. If you tinker with the engine and other parts of the motorcycle, then you can quickly achieve higher speed too.

There are many models of 250cc motorcycles present in the market that can achieve high speed. However, if you are looking for the fastest model that can reach a really high speed in a matter of seconds, then the answer is the Kawasaki Baby Ninja ZX250R. This model of 250cc motorcycle comes with a powerful engine that lets it touch 105 miles per hour. The best part is that this motorcycle can touch 0 to 60 miles per hour in 7.5 seconds only.

Are 250cc bikes good for the highway?