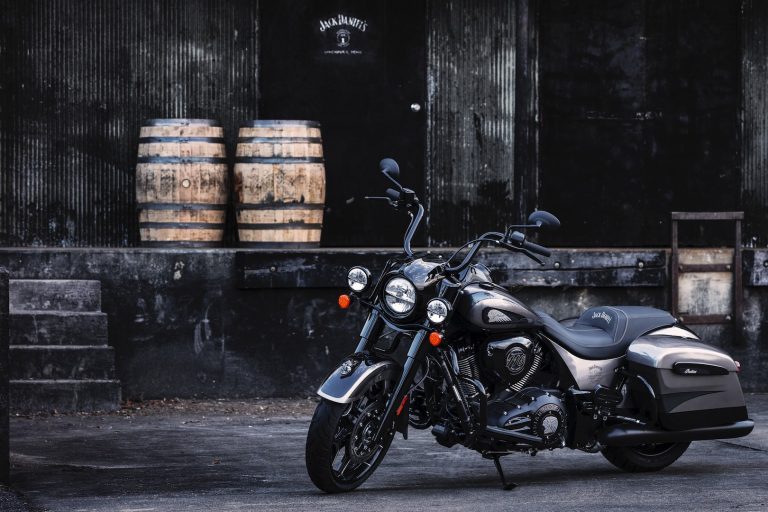 Even though some people have expressed that they don’t feel well that a motorcycle company is partnering with an alcohol making company, you can be sure that Jack Daniel’s Limited Edition Indians have been a huge success with riders so far. The version from the past have sold out in only around 10 minutes, so Indian is going with a lottery system to give more people a chance to purchase a 2022 Jack Daniel’s Limited Edition Indian Springfield Dark Horse custom bagger bike.

The 2022 Jack Daniel’s Limited Edition Indian Springfield Dark Horse lottery starts now and goes on until midnight EDT on March 17, 2019. If you want to give a try at the lottery go to 2019jackdanielsindianmotorcycle.com.

There will only be 177 models made which was inspired by the Old No. 7 Brand trademark

The starting price for the 2022 Jack Daniel’s Limited Edition Indian Springfield Dark Horse is $36,999 and it releases in September 2019, that’s also when the deliveries will start.

There are a lot of upgrades from the standard model of the bike. The gunfighter seat tank strap is now made from premium leather and has a Jack Daniel’s Single Barrel Select logo. The Rider and passenger floorboards have Jack Daniel’s Single Barrel Select engraved into them. It also now has 12-inch mid-rise ape-hanger handlebars, slammed saddlebags, custom machined wheels, quick release tinted flare windscreen and unique LED lighting package.

When you get the 2022 Jack Daniel’s Limited Edition Indian Springfield Dark Horse you won’t only get the bike but you also get a Jack Daniel’s Single Barrel bottle display. Even though you don’t get any alcohol the display comes with two uniquely branded rocks glasses and an empty space where you can place a bottle of Jack Daniel’s Single Barrel Select. The holder is also very premium since it’s padded with the same leather you can find on the seat of the bike. In addition, you can find your name engraved on the display, the VIN of the bike and the bike’s limited edition number.

If you want them but the first model ever made you will have to do it another way since it will only be available through a charity auction. Richie Bros. Auction Company in Arizona will be the ones auctioning off the #001 model for Jack Daniel’s Operation Ride Home, it’s a charity aimed at reuniting men that are in service of their country with their families during the holidays. All the money made from the auction will go to Operation Ride Home. Ever since this operation started there have been over 6000 families who have seen benefits from this.