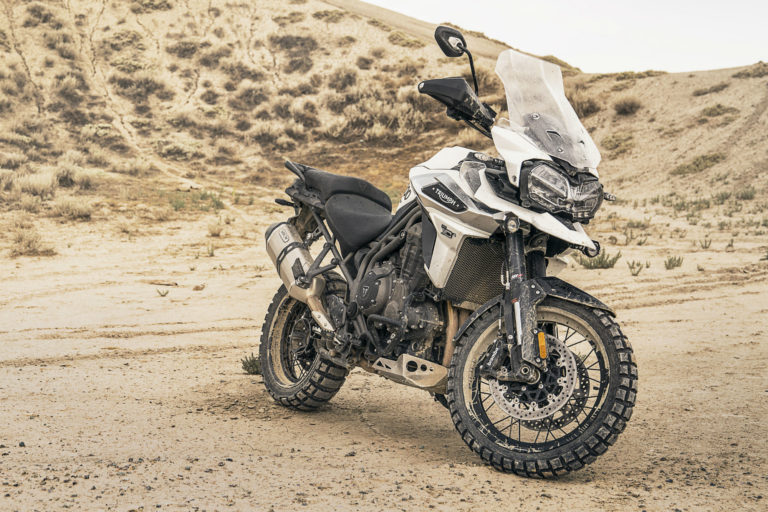 This is definitely an adventure bike that improved on most of the things we didn’t like in the previous series. The XCX slimmed down which led to improved handling and performance from the improved chassis and a much better power plant. The controls are very customizable and it has a variety of electronic safety features which gives it a very flexible riding style.

When it comes to the design it the bike nails it. The winkers could have been placed onto the mirrors but it still looks good. The motorcycle does come with hand guards right out of the factory so it’s good for all weather conditions including the very cold ones because it also has hand warmers.

The windscreen is electrically adjustable and has a vented design that relieves the vacuum behind the glass which makes for less wind resistance and reduces the head-buffet effect. It also has a five-inch TFT display to show you all the instrumentation and controls.

It has a 5.2-gallon fuel tank that kind of looks like a camel hump which is typical of this bike type. It has a simple taillight and another pair of winkers that are just above the mudguard.

The steering and handling are very smooth, the forks ride at 23.2-degree rage angle with 3.93 inches of trail, which make up for a great riding experience both on and off-road. New all-black wire wheels mount a 120/70-19 and a 170/60-17 hoop that gives off more of a street-like design but is also great for soft surfaces. All this is pretty standard for this type of bike but it all changes with the suspension which is a set of strong 48 mm inverted forks in the front and in the back a coil-over monoshock. But the real kicker is the electronic adjustment feature that enables you to tweak the damping values of both the forks and the shock.

Now so far it’s all been good news, and the bakes bring even more. The breaks are made up of 305 mm discs in the front and 282 mm in the back.

When looking at the drivetrain we should start with the keyless ignition system that enables you to activate the bike just from being close to it with the key and an immobilizer. It has 4 riding mode presets from before and new one called “Off-Road Pro” which makes it five in total. It also has a great traction control system which just like the ABS is sensitive to leaning by accounting for the bike’s traction and g-force.

The Jet Black version comes in at $19,550 which is the cheapest one. If you want the Matt Khaki Green or Crystal White one you’ll have to pay a bit more, $19,800 to be exact. You can always pay more if you want some more accessories on your bike.

There are a number of bikes that can be competitive with the Triumph but I chose the Ducati because it offers a lot and makes for a great comparison, the Ducati Multistrada 1260 Enduro to be exact.

When it comes to design the Ducat is beautiful, it just fits well with its curves giving it an almost feminine shape. The Triumph definitely isn’t ugly, but the Enduro comes out on top here.

The chassis is very similar to the XCX but adds a vehicle hold feature which makes it easier on steep inclines.
When it comes to the engine the Enduro packs a bit more horsepower, 158 to be exact, and 94 pound-feet of torque against 141/90 from the XCX. Yes, the Ducati has a bit more to offer but you’ll feel in the price too, it comes in at $21,995.